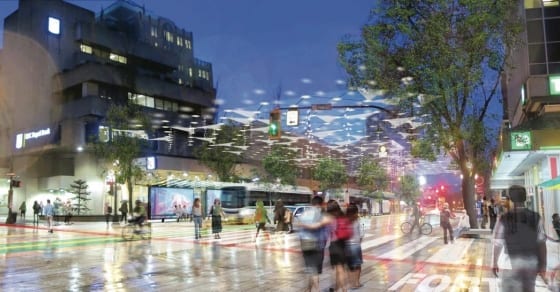 Times Colonist | Cars will take a back seat on Douglas Street if a vision being championed by the Downtown Victoria Business Association ever comes to fruition.

The plan envisions Douglas Street between Hillside and Belleville avenues being transformed into a place where pedestrians, cyclists and public transit take priority over cars.

If adopted, the 20-year plan would integrate key elements such as lighting, pedestrian activity, traffic and cycling to change what is now a street dominated by single-occupant vehicles into a “central corridor into the heart of Victoria.”

“The objective was to recapture some of the best elements of Douglas in its historical role as the main street of Victoria — a role that’s been kind of diluted over time as the city has grown and traffic has really taken priority in the right of way and changed the nature and character of the street,” Greg Damant of Cascadia Architects said in a presentation to Victoria councillors.

To turn Douglas into a more vibrant and less auto-centric street, the plan suggests introducing elements such as dedicated centre-median transit and separated bike lanes, wider sidewalks and boulevards, canopy lighting at key intersections — such as a giant circle above the Hillside-Douglas intersection — paving of Centennial Square green space to give it a stronger presence and provide seating and space for vendors, and scramble intersections where pedestrians can cross the street diagonally.

Car traffic would be reduced to one lane in either direction.