Their second show of the Canadian tour began with a wall of sound blasting forth from behind an arena-high rock flag, a mammoth version of the kind of thing I had in my bedroom as a teenager.  The flag dropped to reveal the rock veterans, looking and sounding no worse for wear after a career spanning 38 years.

The set didn’t disappoint, covering all the hits and at one point waxing nostalgic with heyday photos and videos on the screen as they played Hysteria.  There were also some great extras like singer Joe Elliott’s acoustic version of Two Steps Behind with crowd accompaniment, and famously one-armed drummer Rick Allen’s drum solo from his tiered riser.  Elliott, Allen and the rest of the band, bassist Rick Savage, resplendent in a white suit trimmed with rhinestones, guitarist Phil Collen, in excellent shape – bare-chested and …um, oiled?…, and guitarist Vivian Campbell, are the band’s longest-running line up, who have been playing together since the 90’s.

The guys may have aged well but crowd was clearly a bit older than we used to be and it took a while for the enthusiasm to build.  After all, it was a work night and 9:30 was getting a tad late for some of us.  Nevertheless, there were enough middle-aged teenagers, complete with air instruments, concert tees and – my personal favourite – mullet wigs to pack the Save on Foods Memorial Arena.  And we weren’t the only ones singing along to every lyric of every song and raising our lighters to classics like Love Bites – the next generation of denim clad wayward youth rocked out alongside people old enough to be their grandparents.  By the time they played the mandatory Pour Some Sugar on Me and Let’s Get Rocked, we were all on our feet. 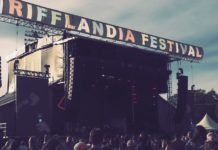