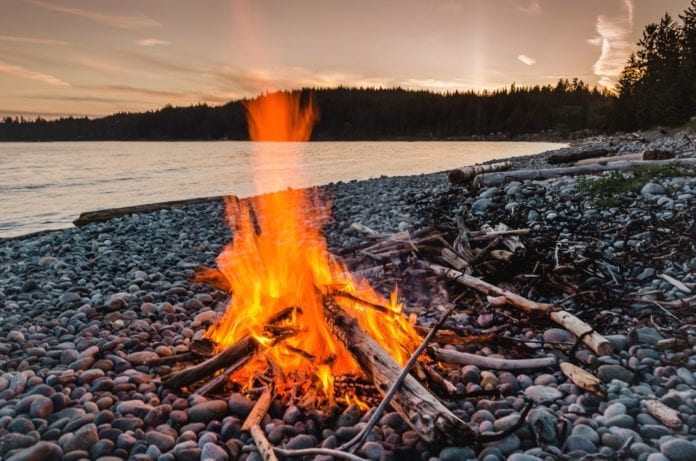 Effective at noon on Friday, May 13, 2016, Category 2 open fires will be prohibited in most areas of the Coastal Fire Centre’s jurisdiction to help prevent human-caused wildfires and protect public safety.

This prohibition will remain in effect until Oct. 21, 2016, or until the public is otherwise notified.

The prohibition covers all BC Parks, Crown lands and private lands within the Coastal Fire Centre’s jurisdiction, with the exception of the area known as the “Fog Zone” and the Haida Gwaii Forest District.

Specifically, this prohibition applies to:

* The burning of any material (piled or unpiled) smaller than two metres high and three metres wide.

* The burning of stubble or grass fires over an area less than 2,000 square metres.

* The use of fireworks, firecrackers, sky lanterns, or burning barrels or burning cages of any size or description. The use of binary exploding targets (e.g., for rifle target practice).

This prohibition does not apply within the boundaries of a local government that has wildfire prevention bylaws in place and is serviced by a fire department. Before lighting any fire, residents should check with local authorities to see if there are any other fire restrictions in effect.

A poster explaining the different categories of open burning is available online here.

This prohibition does not ban campfires that are a half-metre high by a half-metre wide or smaller, or apply to cooking stoves that use gas, propane or briquettes. People lighting a campfire must maintain a fireguard by removing flammable debris from the campfire area, and they must have a hand tool or at least eight litres of water available nearby to properly extinguish the fire. Campfires must be fully extinguished when not attended.

Any person lighting larger fires (or more than two fires of any size) must comply with open burning regulations and must first obtain a burn registration number by calling 1 888 797-1717.

Anyone who lights, fuels or uses an open fire when a fire prohibition is in place or fails to comply with an open fire prohibition may be issued a ticket for $1,150 or, if convicted in court, be fined up to $100,000 and/or sentenced to one year in jail. If the contravention causes or contributes to a wildfire, the person responsible may be subject to a penalty of up to $100,000 and ordered to pay all firefighting and associated costs.

The Coastal Fire Centre covers all of the area west of the height of land on the Coast Mountain Range from the U.S.-Canada border at Manning Park, including Tweedsmuir South Provincial Park in the north, the Sunshine Coast, the Lower Mainland, Vancouver Island, the Gulf Islands and Haida Gwaii.