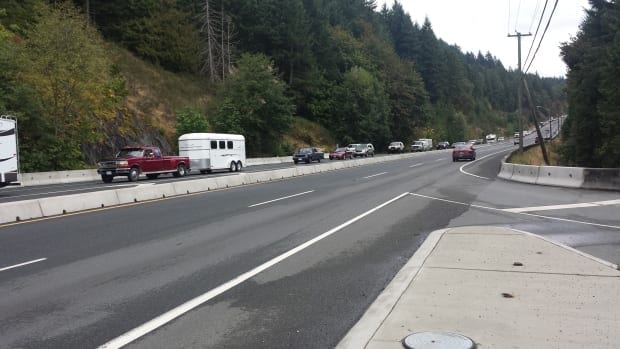 The Malahat has reopened following a bizarre incident which briefly shut down all southbound lanes and one northbound lane of the highway on Friday afternoon.

Witnesses say a shirtless man ran out from the bushes, jumped the meridian and was running erratically on the highway where he was nearly struck by a dump truck.

There were reports the man was hit twice by passing vehicles. However, all vehicles were able to slow down in time and the driver of the truck used his vehicle as a barrier to stop southbound traffic while police attempted to apprehend the man.

One person who witnessed the incident wrote the following on Facebook:

“Just came through the Malahat about 20 minutes ago from Duncan. A man came running out of the bushes with no shirt on and jumped the meridian – he ran right in front of a semi truck behind me and luckily the truck stopped just in time. The driver had the semis door open before he was even at a complete stop. I called 911 (as I’m sure the Semi did as well) but he seemed absolutely frantic.”

The man was also seen running through people’s yard on his way to the highway.

Crazy half nakid dude ran through my yard and scared the shit out of me he ran to the #malahat and caused the police to crash! #scarymornin

Danielle Jodoin told Victoria Buzz the man was also in her yard.

“I had to talk him down because he was freaking out. He scared my mom, who was gardening, she didn’t see him run up on her,” said Jodoin.

“He actually asked me to call the cops, he looked terrified”

“The male was attempting to walk amongst the vehicular traffic and transverse back and forth across the highway,” Shawnigan RCMP said in a statement.

The 33-year-old male was apprehended under the Mental Act and transported by BC Ambulance to a local area hospital for assessment.