A tip in a local photography forum has led to allegations of large-scale theft, removal from the Sooke Fine Arts Show, and doubtless future repercussions for Blue Heron Art Enterprises.

The sleuthing began when a photography enthusiast noticed a familiar photo at the Sooke Fine Arts Show. It appeared to be being presented by Blue Heron as original work (see below). 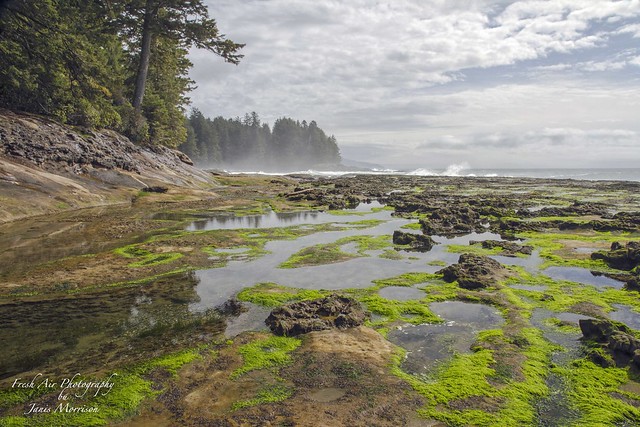 That photography enthusiast spread the news, and soon the information had made its way to Facebook.

“If you are a local VI photographer please check to make sure Suzanne Heron isn’t stealing your nature photography and selling them as her own prints,” Facebook user Ruthless M posted in a local photography group.

“At least two photos spotted at the Sooke fine arts show, one belonging to Janice Morrison of Fresh Air photography and another to Photos by Dave. Just a heads up, please share with your other (photographer) friends.”

Two Photos Just The Tip Of The Iceberg

As it turned out, the pair of photos was only a small part of an alleged larger trend of thefts. The comment section for Ruthless M’s post turned into a timeline of events.

Other Facebook users posted their own discoveries, including the photo below, which appears to be an altered version of a National Geographic photo by Edmund Lowe (below).

Photo on display by Blue Heron at an art show:

So far, the exact consequences of Blue Heron’s actions have yet to be determined.

However, more and more allegedly stolen photos have been identified in the past few days and several of the original photographers are reportedly in the process of seeking compensation from Blue Heron Art Enterprises.

“The Sooke Fine Arts Society takes copyright issues very seriously,” Christa Rossner, the society’s Executive Director, wrote in an email. “As part of our submission criteria, we require artists to confirm they understand the requirement for original, non-derivative artwork. We count on the integrity of artists in this regard.”

“Having found issues with Ms [Suzanne] Heron’s (founder of Blue Heron Art Enterprises) entries this year and having spoken with the original photographers, the work was removed from the show,” said Rossner.
“Purchasers were advised they had purchased work that did not meet our show criteria and were offered reimbursement. Discussions between Ms Heron and ourselves ensued and are between the two parties.”
Update – Victoria Buzz reached out to Suzanne Heron and she gave the following statement:
The few times I use another photographer’s image as the basis for my work, it is my practice to gain permission and give them credit. I have recently learned much more about Canadian copyright laws that impacts some pieces. I am in direct communication with all the individuals involved and I am committed to a positive, satisfactory resolution for all concerned. I can clarify further when I am confident that those involved are satisfied.

“We’re in for a ride”: B.C. watching global pandemic progression to plan easing of restrictions

“We’re in for a ride”: B.C. watching global pandemic progression to plan easing of restrictions