The $34-million project to improve five kilometres of the Trans-Canada Highway through the Malahat is nearing completion, and the new lanes could be open as next week.

Construction crews have finished paving and are now focusing on barrier installation and line painting.

According to the Ministry of Transportation, approximately 95% of the roadside barrier are now in place, and roughly half of the median barriers have been installed.

The Ministry of Transportation hopes that the new lanes will be finished by the end of the month, and short of that, before Thanksgiving.

“The goal is to have the fourth lane painted and open between Aspen Road and Shawnigan Lake Road by the end of the month, or first week of October.”

The Malahat safety improvement project was first announced by B.C. Transportation Minister Todd Stone in June 2016. Construction on the notorious stretch of road began in the spring of 2017.

The federal government is contributing up to $14 million for the project, and the province of British Columbia will cover the remainder of the cost.

Improvements include expanding five-kilometres of the Malahat from two lanes to four, with wider shoulders, and the addition of a three-kilometre-long median barrier.

A new turnaround facility is also being constructed, and overhead lighting is being added to new access roads to improve overall visibility for drivers turning on and off the Malahat.

When finished, 11-kilometres between Finlayson Arm Road and the Malahat Summit will be separated by median barriers – comprising about 65% of the Malahat.

The timing of the opening is weather dependent and according to Environment Canada, we are set to see at least five straight days of sun. 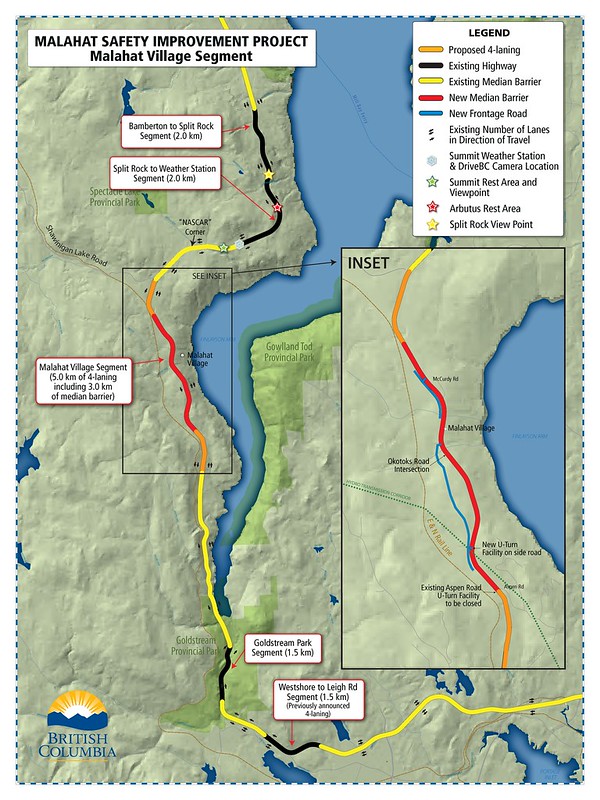 End of the road: Save Old Growth to halt road blockades across BC