Only two months to go!

The facility has undergone renovations over recent months to increase its capacity to 6,000 – enough to facilitate a European-style environment and transform the building into a veritable fortress.

On April 28th, Pacific FC will break that fortress in with its first ever home match, hosting the Halifax Wanderers (HFX) in a historic night of soccer. Halifax will fly 4,476 km – the 3rd largest trip in professional soccer across the globe – a trip PFC will make themselves on June 1st.

Victoria Buzz will be on location at the home opener to celebrate and welcome the island to its new era of soccer – come say hello, chat all things PFC and even have the chance to win some sweet prizes!

On May 22nd, the Canadian Championship officially starts – a 5-round home-and-home tournament that determines the champion of Canadian club football.

Unlike the Stanley Cup – which is only competed for by members of the National Hockey League – the Canadian Championship melds every professional Canadian team into one merciless tournament. This means teams like PFC will not only compete against other Canadian Premier League opponents, but will also battle professional teams in the MLS and the United Soccer League.

This also means that if PFC can defeat Cavalry FC and subsequently conquer its second round opponent, Victoria could host the Whitecaps right here in our backyard in round three.

After the home opener against Halifax, PFC will go on to play Valour FC, Forge FC, FC Edmonton, and York9 FC as their first 5 matches in history come to life.

It’s going to be a thrilling 6 months! 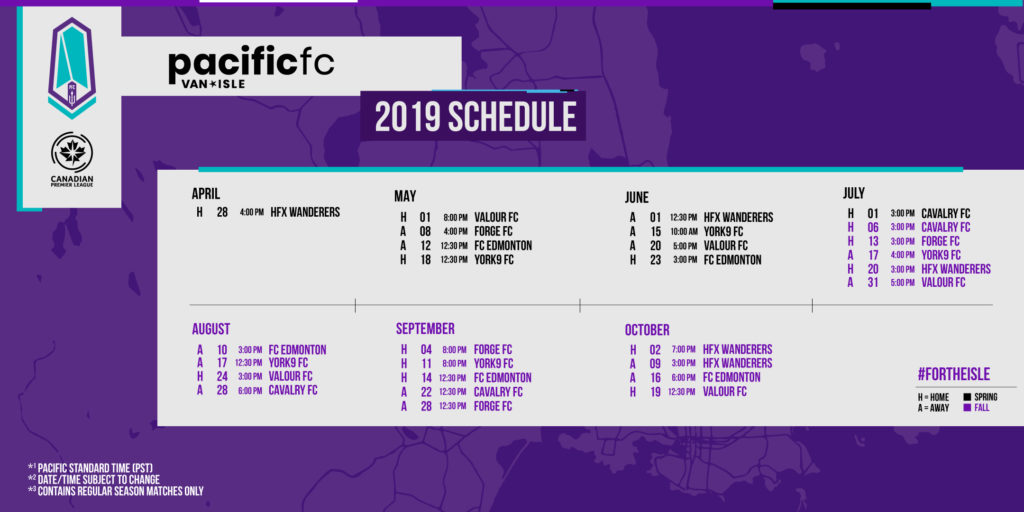 Picture Westhills Stadium roaring with chants and cheers as PFC bags their first goal in club history; feel the vibe of 6,000 fellow islanders celebrating PFC’s first ever victory, kicking off a summer and lifetime of professional caliber soccer.

Vancouver Island’s passion for soccer is obvious – you can see it with every pitch and clubhouse that populates the region. People don’t like soccer here, they love it – and it’s just the same for soccer supporters across the world.

There’s a reason the loudest stadiums on the planet are the ones with 18-yard boxes and corner flags, and Westhills Stadium won’t be any different!

It doesn’t take a professional designer to acknowledge the sleek yet bold branding Pacific FC has undertaken, showcasing vibrant colours such as starfish purple and lagoon blue.

Those good lookin’ soccer players aren’t the only ones feeling sharp in them, either – you can unite with thousands on the island to show off a team that doesn’t just belong to Victoria or Langford, but to the entire island.

Whether it’s a stylish hoody, a sweet jersey or a bold knitted scarf, you can represent with everyone. After all, Pacific FC is the island’s team.

You can prep for the home opener by visiting the online fan shop, or checking out the team store at 665 Fort Street. The merchandise is sweet!

Bringing the family out for some footy!

Nothing is better than bringing the kids out to a stadium where they can expend all of their excess energy on yelling and chanting and cheering – it’s good for them! Not to mention, Pacific FC matches will be fantastic summer fun to add to your child’s never-busy-enough summer schedule.

The Canadian Premier League’s whole mantra is about growing the game for Canadians – including the fans. There will be lots of opportunity to meet the players, and we’ve all seen the smiles professional sports players can put on the faces of kids as they meet their heroes.

Pacific FC players deeply understand the role of growing the game and touching the community. It’s something many of them have truly embraced as they’ve committed to being a part of more than a league – but as a new chapter in Canadian soccer.

Could it be that Canadian internationals and PFC squad members such as Marcel de Jong or Marcus Haber can inspire the next generation of Vancouver Island footballers?

Canadian international Marcus Haber isn’t the only one diggin’ the island vibe around here. While us islanders get national bragging rights for the fact our lovely weather allows for local competitive leagues – such as the Vancouver Island Soccer League and Lower Island Women’s Soccer Association – to play through winter, it also leaves our summers free to enjoy what makes the island home: beaches, nature, the ocean, and a light breeze on a sunny Saturday afternoon.

Summer means sunshine and soccer. It means you’re going to have to even out that soccer sock tan, and it means there’s a Saturday afternoon waiting for you and your buddies to hit a beach, enjoy quality company, and top it off with Pacific FC match in the evening to a setting sun and the sweet taste of victory.

If you wanted, you could have at least 14 of those super Saturdays and Sundays. Check out season ticket info here!

Join the movement – it’s happening from coast to coast

Pacific FC and the Canadian Premier League is about more than just watching supremely skilled soccer players dazzle every weekend. What truly is happening is a nationwide movement to elevate soccer to a level we can all be proud of. After all, Canada will play co-host to the 2026 World Cup, and with it comes an opportunity to state to the world that we don’t just have a massive amount of kids in youth soccer – that we have superb numbers for youth soccer and that we develop them.

It was at Pacific FC’s official unveiling at the Esquimalt Roundhouse that President and former national team player Josh Simpson posed a simple question: Does it really make sense for a 15-year old kid to leave their parents, siblings, friends, and entire life in order to pursue soccer professionally?

For the first time ever, soccer will begin weaving itself into the fabric of 7 cities across the country, including our beloved island -and it will be a complete blast to be a part of!

5 things to do in and around Victoria today, Monday February 24th