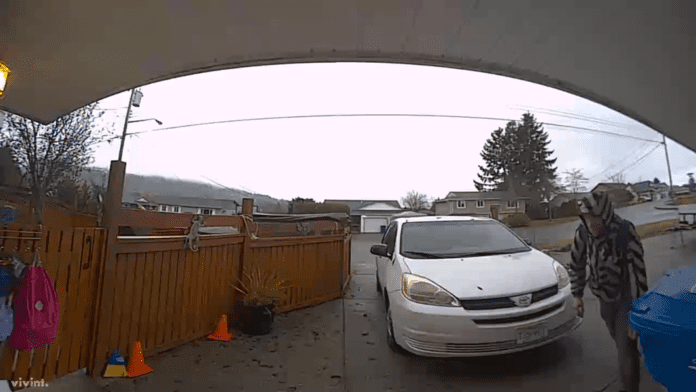 Nanaimo RCMP are asking for the public’s help in identifying a man who stole three backpacks from a Vancouver Island daycare.

The theft occurred at around 10:45 a.m. on Tuesday November 24 from a daycare located on Wildlife Place.

The backpacks were hung on the fence outside the home due to COVID-19 guidelines.

As soon as the owner saw that that the backpacks were missing, she called the police and reviewed her security system.

A man can be seen riding into the driveway on a yellow mountain bike. He then walks over to the backpacks, grabs three of them and rides off.

Police attended and patrolled the area but could not locate the suspect but were able to find two of the three missing backpacks in a marshy area near the Nanaimo Ice Centre.

Police say the backpacks were left open with their contents strewn about nearby.

Police believe the man is still in possession of the last backpack, which was slightly larger and dark blue in colour.

“The little ones were not told about the theft but when the parents were notified they had a range of emotions, from anger (to) disgust to shock,” said Const. Gary O’Brien of the Nanaimo RCMP in a release Thursday.

The man is described as a white male in his late teens or early 20s who was wearing a distinctive hoodie with stripes and a geometric pattern design.

The daycare no longer hangs backpacks on its fence.

Anyone with information on the theft or the individual is asked to call Nanaimo RCMP at 250-754-2345.