A new two-way bike path that is nearing completion at University of Victoria and is expected to be ready as students return this Fall.

UVic campus has remained quiet for students since the pandemic began last year, but workers have been busy constructing the new bike and pedestrian lanes.

In June 2020, the provincial government announced that Oak Bay and the University of Victoria were approved to receive $316,380 from the province’s active transportation grants program.

The program was set up as a way to help rebuild British Columbia’s economy during the pandemic and meet CleanBC climate goals.

The funds are being allocated to Oak Bay’s University Drive Connection Pathway that will be a bidirectional bicycle pathway serving approximately 1,370 cyclists per school day.

The project will add a new 3-meter bi-directional bike pathway adjacent to the existing path, which will be dedicated to pedestrians only. It will also include intersection crossing improvements, new lighting, and bicycle and pedestrian pathway counters. 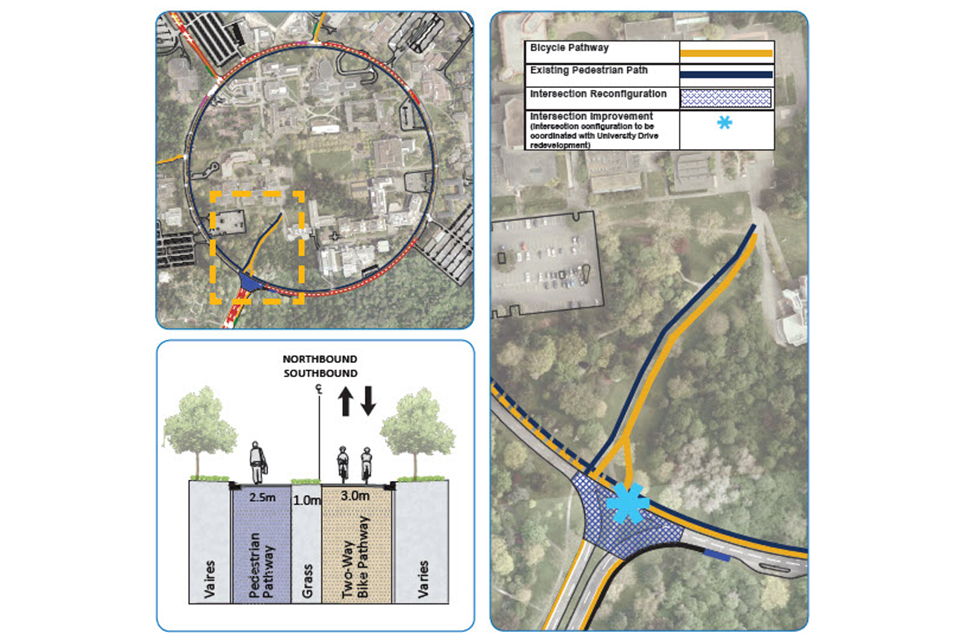 The existing pathway will be converted to a pedestrian-only pathway that serves about 700 pedestrians daily.

The bike and pedestrian lanes connect University Avenue to the heart of the campus, and it goes around Ring Road.

“This is the first of seven network improvement projects in our Campus Cycling Plan to move ahead after extensive engagement with the campus community, so it’s exciting. Students, faculty and staff have told us that the University Drive entrance is a congested area where conflicts between pedestrians and cyclists can happen, and this project is going to improve safety and access for everyone, said Mike Wilson, director of campus planning and sustainability

“We’re working hard to increase the use of transit, cycling, walking and carpooling to 70% of all trips to campus, as part of our overall strategy to reduce greenhouse gas emissions and increase active transportation,” says Wilson. In 2018, 62% of trips to and from campus were made by walking, cycling, transit or carpooling.

See the photos below:

@uvic is quiet these days. So not many folks have yet seen new bike infra there. Almost complete. Entering at UniversityAve & across RingRd are new sep. paths for bikes/peds. Short🧵w pics 1/ pic.twitter.com/2XcUqZ9r9m

All told, a great project. Will help @green_uvic and make for a better #yyjbike commute from @DistrictOakBay & @saanich #yyj 🙏 thx @uvic ! 4/4 pic.twitter.com/IeyhXmxMx8

Pain at the pumps: Victoria gas prices surge past $2.32 per litre Monday

Major crime detectives investigating homicide in Sooke on the weekend