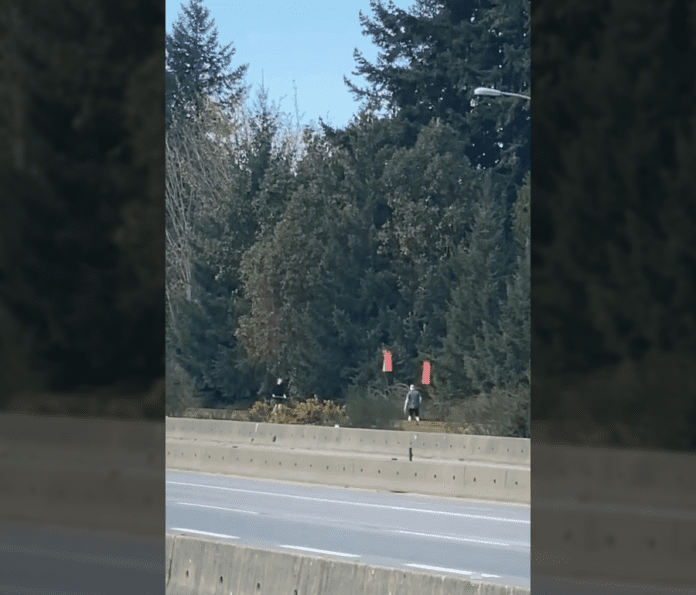 Video has emerged of two men seen removing red dresses, a symbol for missing and murdered Indigenous women, along a Vancouver Island Highway.

This past Saturday, April 10th, in the Oyster Bay area of Ladysmith, two individuals were recorded taking down red dresses hanging from trees off the Trans-Canada highway.

The video shows two men using a large branch to remove the dresses then tossing them into the woods.

The red dresses are hung from tree branches for awareness and advocacy to solve unresolved cases involving missing or murdered Indigenous women and girls (MMIWG).

The REDress Project began as an art installation by Metis artist, Jaime Black, in 2010.

Since then, the project has evolved into a symbol and tool to bring awareness to all Indigenous women who have been murdered or deemed missing across Canada.

Red dresses have been hung from Victoria to Port Hardy since January.

“Indigenous women make up 16% of all female homicide victims, and 11% of missing women, even though Indigenous people make up 4.3% of the population of Canada,” The Assembly of First Nations’ website said.

“Current public data on MMIWG oversimplifies and underrepresents the scale of the issue, yet still demonstrates a complex and pervasive pattern of violence against Indigenous women and girls who are often targeted because of their gender and Indigenous identity.”

It’s unclear who the individuals who took down the dresses are.

“A good friend sent me these videos, hesitant to post or share in case of backlash, yet horrified by what they witnessed. They were taken on Saturday April 10th in the Oyster Bay area of Ladysmith, BC,” the Facebook post read.

The REDress Project continues to shed light on the issues involving MMIWG.