The weather in Victoria last month was all over the place!

Not only was June Victoria’s hottest since records began in 1899, including a straight week of record breaking temperatures during the province’s heat wave, it also included Victoria’s coldest June day on record. 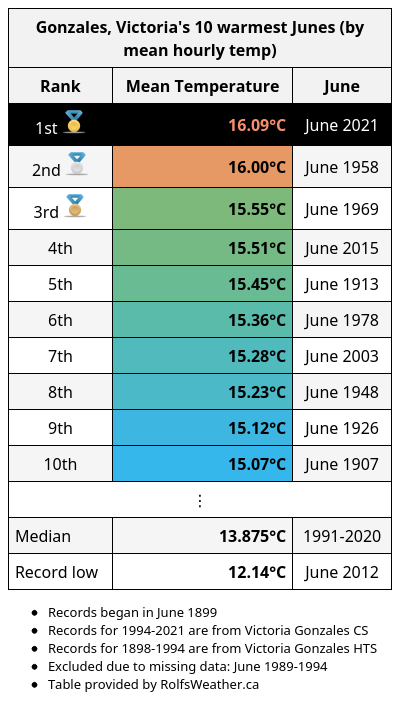 In a press release, BC Hydro announced a submarine cable that delivers power to Vancouver Island was damaged on July 8th.

Although the cause of the leak is still being determined it was discovered shortly after BC’s extreme heat wave. Speculation suggests it may be related.

The outcome of the extreme heat wave came into perspective last week, the most measurable and destructive being the tragic fire in Lytton, but the unforgiving heat had its effect all around BC, according to new data from BC’s Coroners Service.

It was reported that double the amount of deaths were recorded than what was typically seen during the week of June 25th to July 1st in previous years up to 2016.

According to the BC Coroners Service, at least 719 people died over a one-week period during BC’s scorching heat wave, three times more than would normally have been expected to die over the same period.

On Vancouver Island, 97 deaths occurred during the week of June 25th to July 1st. The five-year average is 41.6 deaths over the same seven-day period.

Lytton broke the record for the hottest temperature ever recorded in Canada, hitting a scorching 49.6 C on Tuesday, June 29th.

On June 6th,   temperatures reached a high of 12.5°C, making it Victoria’s coldest June 6th since records began in 1899.

With files from Ryan Hook

Saanichton man falls to his knees after winning $675,000 with BCLC Set for Life

Winter tires are now required on BC highways as of this Friday, October 1st

BC health officials report 2,239 new cases of COVID-19 for a three-day period on Monday, September 27th