If you were one of the many Victorians who purchased a home last year, statistics show that you certainly weren’t alone.

The full year buyer origin data is out, and a recent report takes a look at what changed and what didn’t about where Victoria buyers moved from in 2021.

Keep in mind, this is filled out by agents and is in response to the question,“Where is the buyer currently residing?“—that means it’s not a measure of buyer citizenship, and of course, it’s always debatable whether someone who moved here to rent for 6 months before purchasing should be considered a local or out of town buyer (in this data they would very likely be considered local).

Nevertheless it’s an interesting dataset given it’s been running for 18 years and it seems to match pretty well with both other data sources on migration from StatsCan (figure below) and changes in market activity. 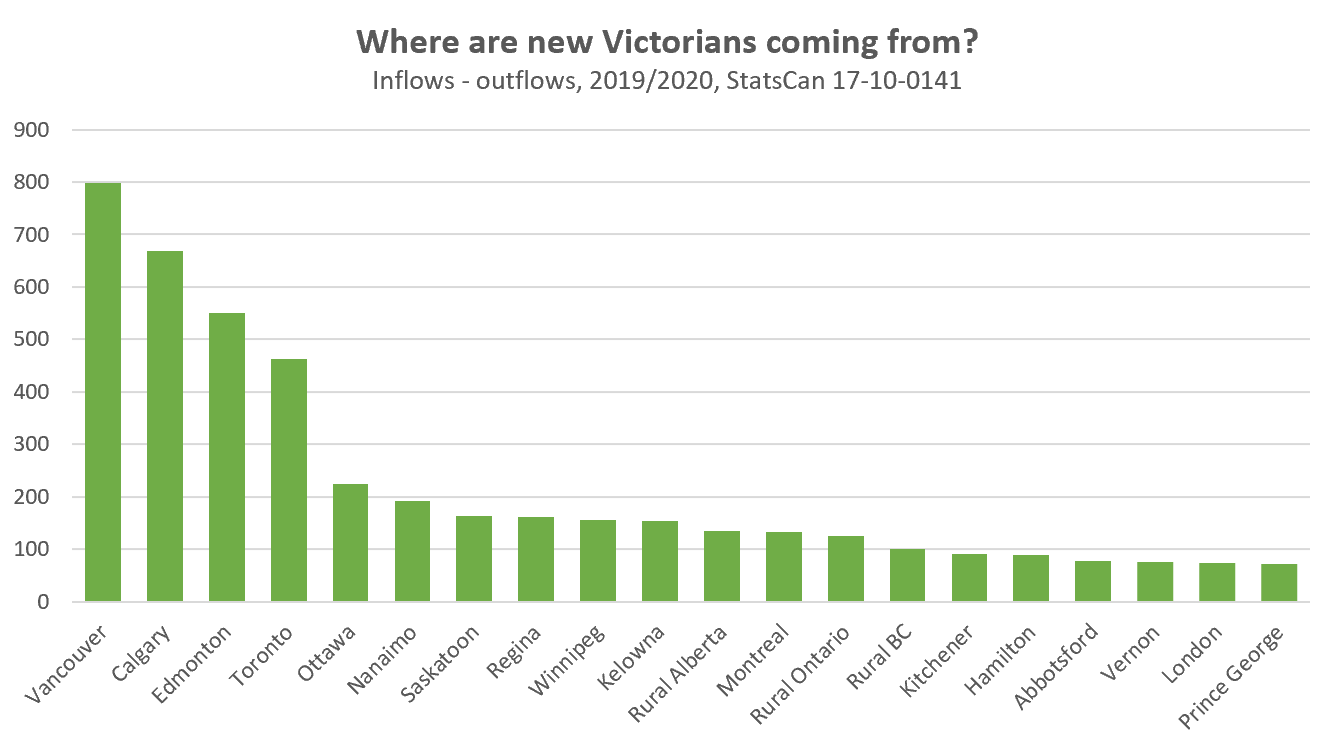 In 2021, we saw 72% of buyers already living in Greater Victoria, while 28% were from out of town. As a reminder for why the split is important, out of town buyers have a much greater impact on the market than in-town buyers—they buy properties without listing one for sale (similar to first time buyers and investors), while in-town buyers generally sell one property and buy another.

The biggest source of out of town buyers by far is the lower mainland at 11% of buyers, with the runner up being buyers from Ontario/Quebec, Alberta, and the rest of BC being roughly equal in second place. 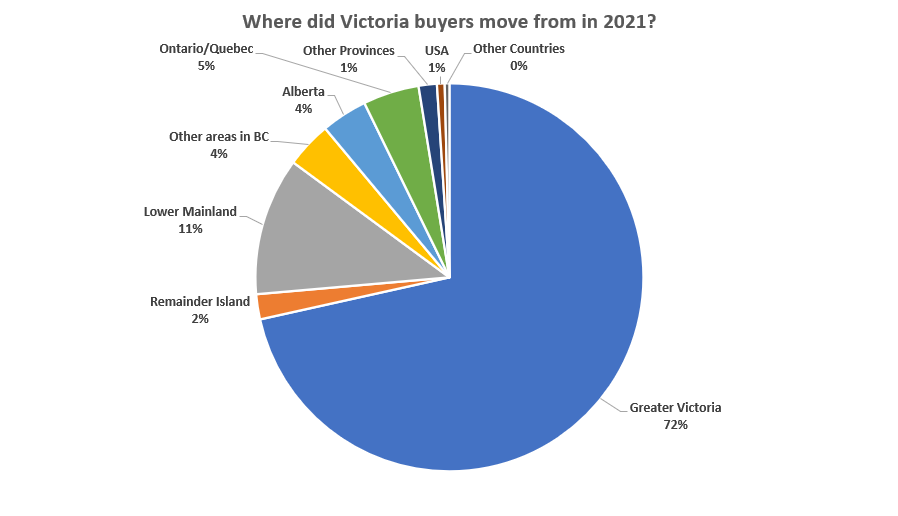 Not surprisingly, buyers moving from out of the country were an insignificant part of the transaction volume. The US was the largest source of that small group, which has been the case every year of the last 18. This can be backed up by provincial foreign buyers data, which has remained at an average of only five sales per month since the introduction of the foreign buyers tax in 2018. 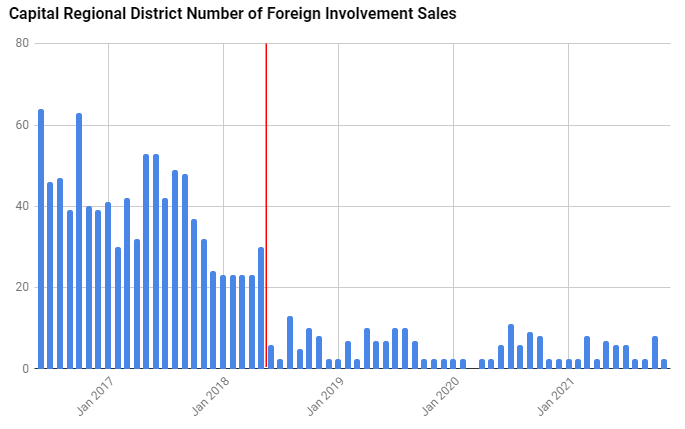 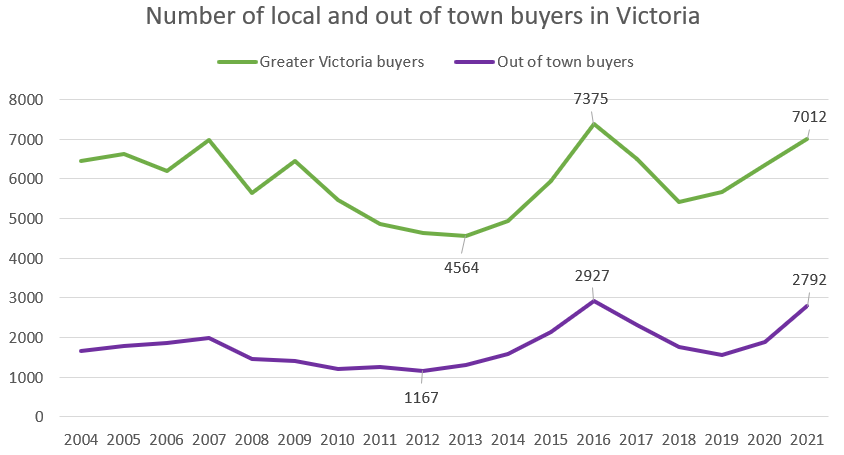 Of the out-of-towners, lower mainland buyers are both by far the biggest single group and the most volatile, increasing 386% between 2013 and 2016. The increase in Vancouver buyers is perhaps largely explained by the price gap between Vancouver and Victoria but there’s clearly more to it, since other out of town buyers also jumped in 2016 and 2021. 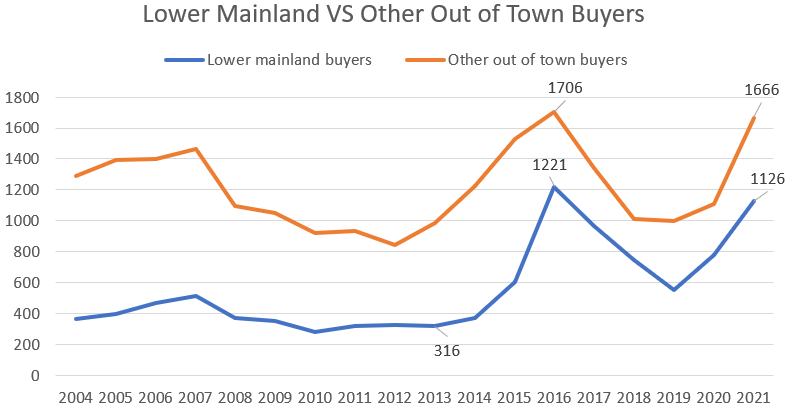 In other news, there’s been a lot of focus on the jump in assessed values this year. This comes as no great surprise, given that only a small percentage of people are buying or selling every year, and the reality of the increases don’t sink in for most until they get that slip of paper in the mail.

In a time when inflation is being driven by excess demand in the face of supply chain disruptions, the resulting wealth effect is not going to help this year.

Of course, the assessments are valuations as of July 1st, 2021—given the strong price gains since then, they are already out of date and lagging market value. Once sales relative to the new assessments this year start being charted, we will likely be starting around +10%.