If you’re a frequent flyer on the bus from Victoria to the Saanich Peninsula, your commute could soon be a little quicker.

In a media release, the Ministry of Transportation and Infrastructure announced new lanes are being constructed at Mount Newton Cross Road and the Pat Bay Highway (Highway 17) so BC Transit buses can jump the queue—similar to the area at Sayward Road.

In addition to this announcement, BC’s Minister of Transportation Rob Fleming said the updates will also include new stops that service Indigenous communities.

“Our government is committed to providing convenient and affordable public transit alternatives to travelling by car,” said Fleming.

“These enhancements will make travel easier and faster for transit users and provide more safe, active transportation options for people walking and cycling along the Highway 17 corridor, benefiting businesses and connecting communities for years to come.” 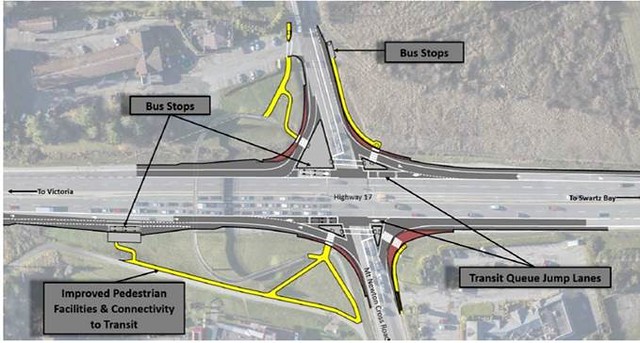 The new bus queue lanes are planned to begin before the intersection and will allow transit buses to bypass congestion—the lane will continue after the intersection at Highway 17, where buses will merge back into the traffic flow.

The intersection will also be configured to improve safety and sight lines by rebuilding traffic islands, as well as adding new signals, signage and road markings—additionally, crews will make enhancements to existing pathways and add new sidewalks.

The release adds that some highway lane closures will be required during night work, allowing crews to work without causing daytime disruptions to the already extensive traffic on Highway 17.

Current cyclist and pedestrian areas will not be affected by the construction, and will remain open during its duration.

In total, the ministry says the project will cost $7.6 million, and will be completed by Nanaimo-based Milestone Equipment Contracting Inc.