An award-winning Victoria screenwriter is making a name for himself in BC’s film scene, tapping into the region’s landscape while crafting stories of horror.

For his latest project, Joel H. Brewster credits the Telus STORYHIVE program for helping him and his team bring it to fruition.

Together with director Mik Narciso, Brewster’s new film, The Victoria I Know, was one of 30 projects to receive $20,000 in production funding through the STORYHIVE Black Creators Edition.

The program looks to amplify local stories and voices from Western Canada, in an edition specifically created to address the underrepresentation of Black voices on Canadian screens and in television.

“Telus and STORYHIVE have been very supportive of creating these diverse stories,” Brewster told Victoria Buzz in an interview.

The Victoria Film School grad sums it up as a “great platform,” helping different marginalized groups and filmmakers of all different backgrounds.

“It’s been very exciting, and I’m excited to tell this story.”

According to Brewster, The Victoria I Know revolves around a photographer named Amber, who has a chance encounter with the ghost of Martha Ann Telfer – the mother of 19th-century politician Sir James Douglas.

“As people know, Sir James Douglas was a very famous resident of Victoria. A lot of the things here are named after him,” Brewster explained. “The history of him and his bi-racial background is the focus of our story.”

For Brewster, this latest film has personal ties.

“I found out about Martha, Douglas’ mother who’s bi-racial, not too long ago,” he said.

“It was one of those eye-opening things to find out that such a famous person here—who came to this land and put his name down on so many things—actually had a bi-racial mother, and she was from Barbados.”

“That’s where my parents are from.”

Brewster says the grant money from Telus will be used towards camera costs, costumes and pretty much everything that brings a film to life.

“Films of this magnitude cost money,” he said. “It’s going to be roughly around a 15-page script, so I’d say the film will be around 15 minutes or longer.”

After production wraps and the film is ready for audiences, Brewster’s hoping to enter it into some film festivals.

Then, it’s on to the next project.

“My team is looking to shoot a feature film here,” Brewster said. “We’re just trying to get the word out there so we can get more backing behind it. Hopefully, we can bring more jobs here and bring more film here.”

“We’re really looking to build a team to make more diverse horror in Victoria and all across BC – that’s our goal.”

Telus’ director of local content, Cameron Zinger, says the company is excited to partner with the Black Screen Office.

Together through STORYHIVE, Zinger says they’re honouring, spotlighting and amplifying the voices, stories and lived experiences of Black creators and their communities.

“Black History Month presents an opportunity for us to acknowledge and celebrate Black artists,” he added. “We are proud to partner with the Black Screen Office to contribute to empowering the next generation of Black creators.”

To learn more about STORYHIVE, visit them online. For more on Brewster’s background, including his accolades and accomplishments, visit his website. 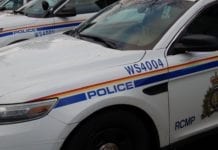