Road rage is incredibly dangerous, creating toxic driving conditions for anyone in the surrounding area.

So how common is it?

According to a new survey by RatesDotCa, Canadian drivers claim to observe road rage behaviour more often while driving than actually engaging in it themselves.

More specifically, 78% of drivers say they have witnessed road rage in the last year, with more than half (51%) admitting to engaging in it. The online survey gathered data from 1,507 Canadians (1,341 licensed drivers) between June 17th and 19th, using Leger’s online panel. 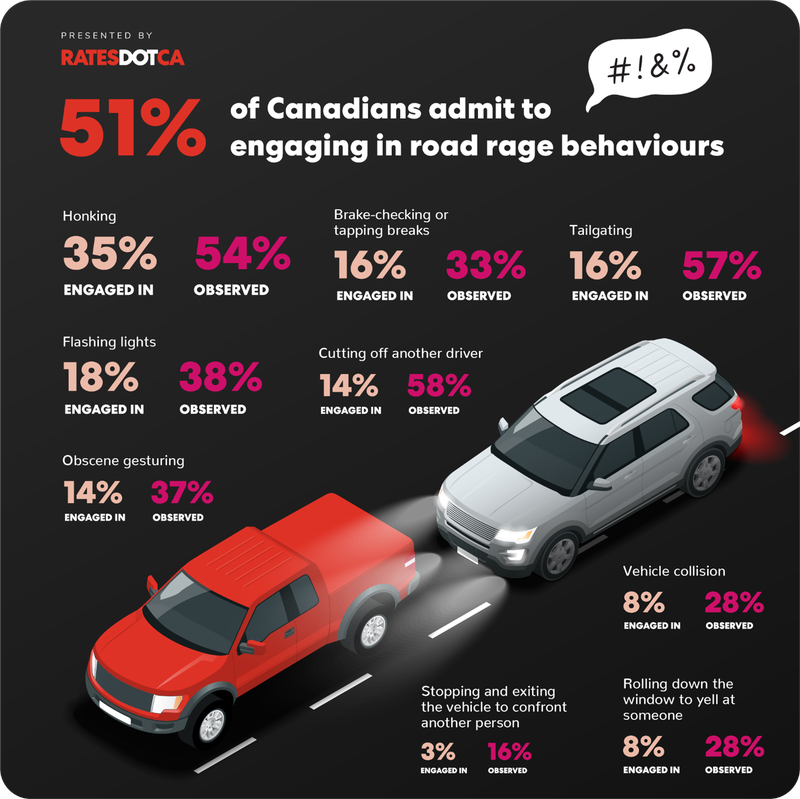 Road rage is divided into different categories within the survey: honking, brake-checking, tailgating, cutting off another driver, obscene gestures, collision, stopping and exiting a vehicle to confront another person and rolling down the window to yell at someone.

According to the survey’s findings, road rage incidents and severity vary based on gender, age and location.

Though men and women claim to engage in road rage equally, men are more likely to engage in confrontational person-to-person behaviours like obscene gestures, rolling down the window to yell at someone and stopping and exiting the vehicle.

Age also plays a factor. According to the survey, the number of Canadians who engage in road rage drops significantly after the age of 55.

Road rage also plays out differently in rural versus urban areas. Drivers in rural areas are not only more likely to exit a vehicle to confront a person than urban drivers, they are also more likely to engage in every road rage behaviour previously listed.

Have you ever been involved in or witnessed a road rage incident?