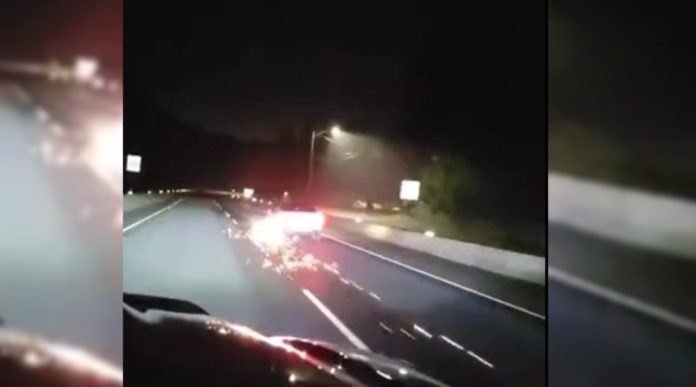 On Saturday, January 14th, Stuart Carmichael and his friends were heading back home to Mill Bay after watching football at a friend’s house.

As they made their way along the Trans Canada Highway, Carmichael caught a glimpse of a site that left him in shock.

In the distance, a 2002 Cadillac Eldorado spewed sparks with only three working tires.

At first glance, Carmichael and his friends assumed the driver was struggling with a medical incident, intoxicated or involved in a hit and run.

As the damaged vehicle passed Carmichael, the group called 9-1-1 after they realized the driver had no intent on stopping.

While on the phone with the police, Carmichael turned around and pursued the vehicle towards Duncan while his friend filmed the incident out of disbelief.

“We got to a point where we got alongside the person, that’s when we found out that the person was trying to hide their face. We followed the driver for about another three or four minutes until his vehicle died and he pulled into the Ramada where he narrowly hit a cyclist,” says Carmichael.

After the Cadillac pulled into the Ramada, Carmichael and his friends got out of their truck to see if the driver was okay.

“As we approached their vehicle we noticed that he was trying to turn the vehicle back on but clearly his vehicle had undergone such a large amount of damage that it wasn’t going to be going anywhere,” says Carmichael.

Upon surrounding the vehicle, they discovered the tire was completely removed, including the disc brake and the calibre.

“He [intoxicated driver] said that he figured there was a problem with the tire, at that point in time we told him he didn’t have a tire. We talked to him for about two to three minutes until the police arrived,” says Carmichael.

After speaking with the suspect, police learned the driver had originally driven from Victoria and it’s believed the Cadillac received extensive damage between the two locations.

“Through the investigation, it was confirmed that the driver had consumed alcohol to a point where their ability to drive was affected, and their vehicle was towed, and they were given a seven day prohibition from driving. The driver was given an immediate roadside prohibition, and released on scene,” said Monseau.

While nobody was hurt during the ordeal, Carmichael says the intoxicated driver needs to learn from this experience.

“I just hope that this guy gets his act together. He legitimately has a chance to make things better because he made such a poor decision by drinking and driving. Even a short distance is unacceptable but for how long he was driving is absolutely astounding that he didn’t cause a serious accident,” says Carmichael.