According to a recent report from Rentals.ca, Victoria’s vacancy rate is down to 1% and average rents in Victoria could rise between 5% and 10% this year.

Leo Spalteholz, a real estate analyst in Victoria for House Hunt Victoria, says “…it’s a safe bet that rents will continue to increase in 2022 in Victoria, likely between 5 per cent and 10 per cent.”

With the CMHC recent report showing the vacancy rate in Victoria back down to 1%, Spalteholz says a shortage of rentals will likely persist.

“Though construction of purpose-built rentals has increased substantially in the last five years,” he says, “This comes after decades of neglect….”

The forecast calls for Toronto average monthly rents to bounce back 11% by the end of the year; Mississauga monthly rents will be up 7% by December; Vancouver average rents will increase 6%; Montreal will post an annual increase of 5% and Calgary rents will go up 4% annually, according to Ben Myers, president of Bullpen Research & Consulting.

Spalteholz  believes the flood of purpose-built rental construction in Victoria will have a large impact and ease some of the rental pressures in the coming years.

“Our inventory levels remain well below historic averages, so prices remain buoyant because the supply is still much lower than this recent decrease in demand,” said VREB president Karen Dinnie-Smyth.

With the high cost of homes in the real estate market, Spalteholz says this means fewer people are able to buy a home, leading to increased rental demand. 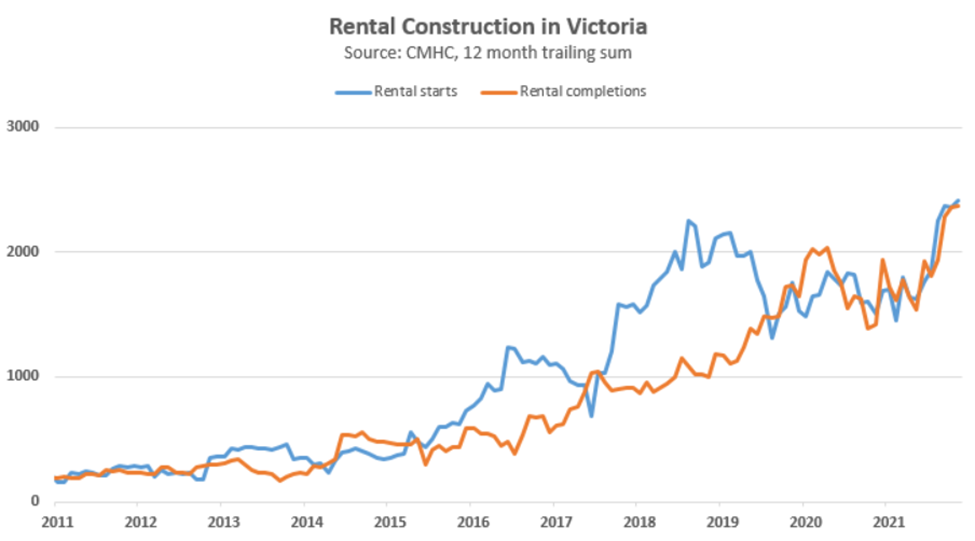 Spalteholz believes a problem facing Victoria’s rental market is that the bulk of the city’s more affordable rental stock is from buildings that are some 60 years old and nearing end of life.

The downside to this approach is it leads to eviction of the residents and the loss of their relatively inexpensive rentals.

To combat this, Spalteholz suggested cities such as Victoria should upzone low density single-family areas near amenities for rentals to encourage new construction where there will be little displacement or loss of existing affordable rentals.