Mix in the summer sunshine with a highly-anticipated Pride celebration, and this weekend in BC’s capital is sure to be one for the books.

It’s just two more sleeps until the 2022 Victoria Pride Parade takes to downtown streets, ushering in a flood of red, yellow, blue and all the other colours of the rainbow.

Set for this Sunday, June 26th at 11 a.m., organizers are introducing participants to a brand-new parade route this year, kicking off at the Johnson Street Bridge before enveloping the Inner Harbour.

Along with the Big Gay Dog Walk and Memorial Drag Ball Game, it’s one of many signature Victoria Pride Society (VPS) events back and better than ever!

“The pandemic has been hard on 2SLGBTQIA+ communities and we are looking forward to connecting again,” the revamped Victoria Pride Society (VPS) exclaims.

Opening parade ceremonies will include Songhees Nation and other Indigenous Two-Spirit guests of Honour, with around 140 parade entries or floats, including Victoria Buzz, set to cruise past as many as 40,000 spectators, according to the VPS. 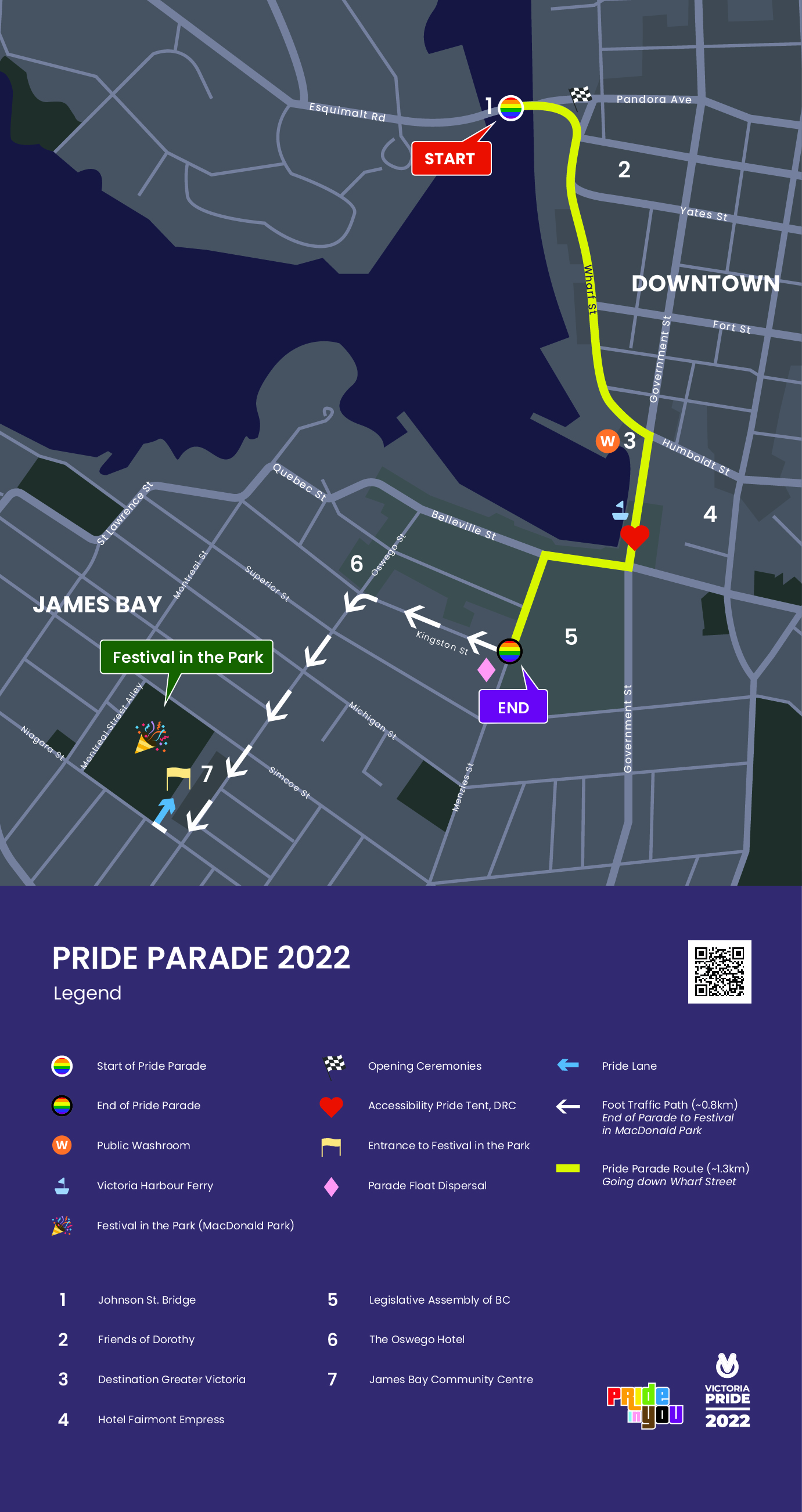 In a Thursday update, VicPD say several streets between Vic West and James Bay will be closed for the parade, with temporary CCTV cameras deployed to support police operations and ensure public safety.

Floats will head south along scenic Wharf Street onto Government, Belleville, and Menzies Streets before foot-only traffic marches down Kingston, Oswego, then onto Niagara Street to conclude the parade at the gates into Pride Festival in the Park.

VPS expects the festival, happening at MacDonald Park from 10 a.m. until 8 p.m., will see thousands of people gather and take part in the multifaceted queer-themed event featuring music, dance, and Canadian drag talent.

For the first time, festival grounds will be entirely fenced in and licensed, “creating a dynamic, festive atmosphere where you can take in all the action, walk throughout the venue and have room to social distance,” the VPS added.

Find all the details about the 2022 Victoria Pride Parade, including other signature VPS events online here!

Victoria Buzz is a proud partner of Victoria Pride 2022

23 things to do in and around Victoria this weekend, August 5th to 7th